“What difference does knowing about that make?”, you might be thinking, “surely it’s the present and future that matter?”.

Well, you’d be right, the present and future do matter, incredibly so, but we can enhance our understanding of what current changes mean by comparing them to past changes.

For example, we are currently seeing sharp increases in the concentration of carbon dioxide in the atmosphere, an important greenhouse gas that traps heat and contributes to rising temperatures.  But how do we know that this is anything out of the ordinary; that it hasn’t happened many times before in Earth’s history?

One way of answering this, and other questions about past climate, is by studying one of a number of environments that hold a record of past changes.  For carbon dioxide, your best bet is an ice core, where the gas is trapped in tiny bubbles every year as the ice freezes, but for other questions, there are also answers in the varying width of tree rings, the growth rate of stalagmites in caves and in the makeup of sediments such as those at the bottom of lakes or in peat bogs.

In using peatlands to study past climate change, we can generally look as far back as the start of the Holocene (the warm period in which we currently live which started about 11,500 years ago).  In some locations, bogs may be even older.

The Holocene is an interesting and important time period to study for several reasons.  Firstly, it is important to understand how the climate system behaves under natural conditions.  That’s not possible to do today because of the influence of human greenhouse gas emissions.  Some of the major climate systems influencing global climate today, such as the El Niño-Southern Oscillation, the North Atlantic Oscillation and even the global thermohaline circulation (all links are to information sheets developed by the University of East Anglia’s Climate Research Unit) have all varied and evolved naturally in the past.  Knowing when, by how much, in what direction and under what circumstances, allows us to make better predictions about how they may change in the future.

Secondly, it’s the period with the most relevance to us as humans.  Of course, we were around much much earlier than the Holocene, but it’s only since the advent of settled agriculture that we have begun to have a more tangible influence on Earth and its climate.

Thirdly, there is a much wider range of evidence available to study Holocene climate than earlier periods from which evidence has been destroyed by the series of ice ages that define the Quaternary – the period last 2.6 million years of which the Holocene is the most recent part.

Past climate change research has had its fair share of popular exposure over the past decade and maybe even seeped a little into the public conscience, but perhaps not always for positive reasons given the flavour of some news coverage.  Maybe the most famous (or should that be infamous?) of all past climate change records is the ‘hockey stick’, a record of northern hemispheric temperature over the past 1000 years published back in 1999 by Michael Mann and colleagues (and more recently extended to 2000 years).  The plots themselves and the work underlying them have been subject to considerable attack over the past decade by those seeking to question global climate change but have been vindicated over and over.  A similar ‘hockey stick’ graph was recently developed for the entire Holocene period by Shaun Marcott and colleagues.  These studies all provide a historical context for the level of current temperature change and importantly highlight the unprecedented rate of recent change – the sharp turn from the hockey stick’s handle to its blade. 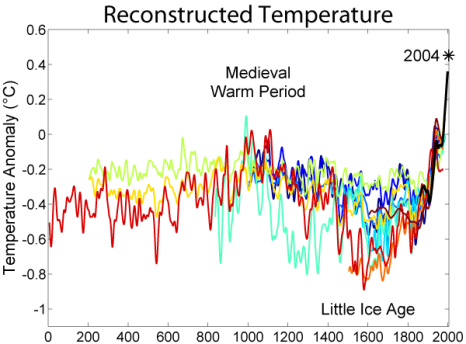 Global mean temperature records for the past 2000 years developed from proxy-climate data – akin to the ‘hockey stick’ plots published by Mann and others. Image credit: Robert A. Rohde, Global Warming Art Project via Wikimedia Commons

Although peatland studies were not part of these data compilations, they illustrate the important role that past climate change research has to play to contemporary debates on the subject. In reading a recent journal article I came across the quote that “palaeoclimate evidence forms the bedrock for the scientific assessment of modern climate change”. As Bogologists involved at the coal face of research projects, we can often get lost in the fine details of our work – the size and shape of a particular amoeba or the best type of age-depth model to apply to our cores.  Quotes like that help reinforce the bigger picture in which we play the role of very small cogs.