Due to its preponderance of bogs, Europe is the traditional home of Bogology – and so it is time for your short history lesson!  Way back as long ago as the late 1800s and early 1900s, publications were beginning to emerge from the likes of Scandinavian duo Axel Blytt and Rutger Sernander as well as German scientist Carl Albert Weber on the potential links between peat bog stratigraphy and climate.  Back then, the research tended to focus on the identification of particular layers, or ‘boundary horizons’, in bogs over a wide area – one of these was called the ‘Grenzhorizont’ and appeared in peatlands as an abrupt change from a darker, more decayed peat to a much lighter, less decayed peat.  It was hypothesised that this shift was caused by a past climate shift.  This would turn out to be correct. 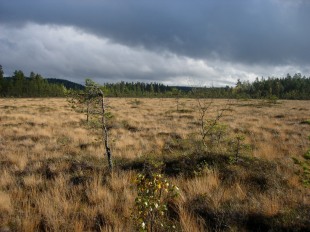 Despite the early flurry of interest, peatland climate research stagnated somewhat in the mid 1900s, partly due to misunderstandings over the way bogs grew and accumulated peat.  The work of Keith Barber in the 1970s and 80s dispelled these misconceptions and from then on the field has really bloomed.  There was a shift in focus during the 1970s and 80s away from the identification of fixed points towards the reconstruction of climatic curves – continuous records of past change.  This was partly led by Barber’s research, but also that of Danish scientists Bent Aaby and Henrik Tauber.  So the development of peat-based past climate research has really been, and continues to be, a pan-European effort.  Over the past 30 years the field has developed into an exact science providing evidence for past climate change using a gamut of quantitative methods based on a range of physical, biological and chemical properties of peat.

Over the years, we have both been personally involved in European research – primarily through our PhD research with sites in the UK, Germany and Sweden.  Some sites, for example Walton Moss in northern Cumbria, UK, could easily lay claim to being some of the most extensively studied peatlands in the world and are familiarly known as pin cushions, such are the number of core holes in them!  However, this is not to undermine their continuing importance in the developing field of peatland past climate change research and Europe continues to be a hot-bed of important work, despite the emergence of more glamorous locations for fieldwork. 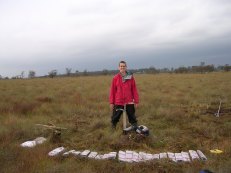 Matt with first PhD core in the bag at Walton Moss, UK 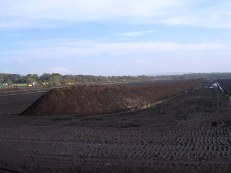 Unfortunately, of all the locations featured in our where we do it section, Europe has also seen the highest level of destruction of its peatlands.  In some areas such as in Scandinavia huge swathes of pristine, untouched peatlands remain a boon to researchers, but sadly in others, such as the UK and countries such as Denmark, the Netherlands and Germany peatlands have been lost to the pressures of agricultural development, be that through drainage of land of exploitation of the peat for fertilizer or, more traditionally, fuel.  Needless to say, once a peatland has disappeared, the valuable scientific record held in its slowly accumulated layers is lost forever.  To a Bogologist this is of course hard to accept, but it is reassuring that what remaining fragments of peatland there are left now tend to be protected areas.