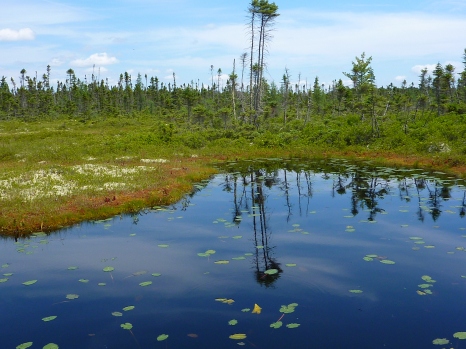 A photo of a bog – just for good measure!

As a Bogologist, I always found it quite difficult to explain my job to people. Only a short while ago a typical conversation might have gone something like this:

Me: “I work as a Research Fellow at a university”

You: “Ok, so what do you research?

Me: “Well … I work in peatlands. Well not actually in peatlands. At least not all the time. My PhD was predominantly concerned with the palaeoecology of ombrotrophic bog systems and their relationship with palaeohydrological change during the Holocene epoch, but as my research has progressed I have become increasingly interested in aspects of peatland geochemistry and also the role peatlands play in the global carbon cycle. Of course, let’s not forget the geochronological aspects of my work. That reminds me, I have a cracking joke about radiocarbon dating. So, a radioactive isotope of carbon walks into a bar…”

You: “I’ll stop you there. I still don’t know what you actually do?!”

Ok, I’ve never really said all that. I used to change the subject after mumbling something about “peat bogs and climate change”. The difficulty I experienced just trying to explain my job frustrated me immensely – and that is one of the reasons we’ve set up Bogology. The site is primarily to help you learn a bit more about the research we do into peatlands and past climates, but it’s also to teach us how explain it better! It’s a two-way thing.

So why not spend some time exploring our site? Learn about the relationship between bogs and climate, or perhaps what we get up to in the field and the lab. But remember: if there’s something you want to know more about, or we haven’t made quite clear enough, let us know! We can’t wait to hear what you think.