Humification is a process that occurs in soils and peats (remember: peat is not soil), which sees organic material decompose and break down. Bogologists use peat humification analysis to work out how broken down the peat in our cores has become, as we can often link this back to past climate change.

To understand this decomposition process we need to understand a bit about how bogs work. Peat bogs have two sections. The upper ‘acrotelm’ layer, which is biologically active and open to oxygen in the air which aids decomposition; and the lower ‘catotelm’ layer, which is relatively inactive and saturated with water, largely preventing the peat from breaking down further. So, the degree of humification is largely dependent on how long the plant material that makes up the peat is ‘open to the elements’ in the acrotelm. The boundary between the drier acrotelm and wetter catotelm is the water table, the position of which changes over time and, as we’ve described elsewhere, is heavily influenced by climate. The idea is that higher water tables, caused by wetter and/or cooler climatic conditions, result in less decomposed peats, and vice versa; lower water tables, occurring in warmer and/or drier climates cause the peat to break down more as it sits in the acrotelm for longer. 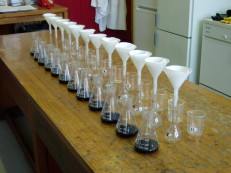 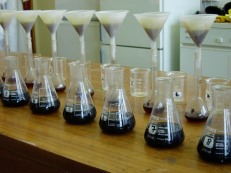 Humic acids are being extracted from the peat samples

But how do we measure how decomposed the peat is? Well, as peat breaks down, more humic acids are produced. These acids are dark brown, so by extracting them from the peat and measuring the colour we can work out the level of humification. We do this using an impressively-named spectrophotometer machine, which shines light through the sample and measures how much transmits through the liquid.

Of course, there are complicating factors and the technique has been criticised more in recent years, but peat humification analysis remains a fairly quick and straightforward way to get additional information that helps us understand what is going on in the bog over time.