As Bogologists interested in using peatlands as a source of information on past climate change, we are primarily here due to the work of one man. That man is Professor Keith Barber, who sadly passed away earlier this year. This blog serves as a small tribute to his work from two of the many young(ish!) scientists that he worked with over his long and distinguished career.

Keith was one of my two PhD supervisors, so had a very direct role in shaping my very early research career. Although I think my PhD ended up somewhat differently to how he envisaged it, his enthusiasm for and interest in the topic (see this blog) was both infectious and challenging at the same time. Not only was Keith my PhD supervisor, he was also the PhD supervisor of my other PhD supervisor, AND of my line manager over the past seven years of being a Research Fellow at Exeter! Far from being unusual, this is a fair reflection of his influence in the field over many years of supervision.

I was thrown into the deep end in terms of getting to know Keith, as he organised a short field trip to Cumbria for me in the first few weeks of my PhD. Keith was a great believer in getting stuck in in the field and the lab and he was keen that I have my own cores to work on as soon as I could, rather than festering away in my office reading papers! Keith being Keith, the trip was based around two things. Firstly, the bogs – the two iconic sites in Cumbria of Walton Moss and Bolton Fell Moss. I remember feeling quite shocked at the vast scale of the peat mining operation that was going on at Bolton Fell Moss at the time, but Keith explained how the very digging of the drainage ditches used in that operation was what first allowed him to examine the stratigraphy and begin to put together his new theory of peat growth and its links to climate. Secondly, and of equal if not superior importance to the bogs, were the pubs. The accommodation and schedule were tailored around Keith’s favourite pubs in the area and in the evenings, I first got to hear, over a pint or two or three of fine local ales, some of Keith’s classic and oft-repeated peatland yarns (what was said on fieldwork stays on fieldwork!).

Walton Moss was a site where Keith worked a lot over the years, but it was really Bolton Fell Moss that defined his career. As we have written elsewhere, this was the site where he carried out his seminal work that showed how the peat stratigraphy of ombrotrophic peatlands was linked to climate. Recently, we received a heart-warming comment on that blog that I think sums up Keith’s wide-ranging influence, not only in academia, but wider afield, as his past students, both undergrads and postgrads, migrated to all manner of careers. We reproduce the comment in part here:

“I had the pleasure of meeting Keith a few years ago when I was completing my Masters whilst on a career break from Natural England. I have since been working on the bog pretty much full time. I was very sad to hear that Keith had passed away, but I hope he’s looking down on the bog now, happy that we are at last saving this great place.”
Deborah Land, SSSI Advisor, Natural England

One of my abiding memories of Keith that I feel gives an understanding of the sort of man and supervisor he was came in the second year of my PhD. We had put in an application to the radiocarbon lab that would provide the dates that were crucial to the success of my entire project. To cut a long story short, the application was rejected, but with a resubmission invited. Keith immediately rallied around me; he was supportive and outraged in equal measure, both of which in their own way helped me to feel secure at a risk point that could easily have proved a major hiccup in my progress had it been handled a different way. We discussed the reasons for the rejection at great length and put together a response and new approach to my data analysis that ultimately meant that next time around, the application was successful. While there were further bumps in the road, I completed my PhD and the rest, as they say, is history. 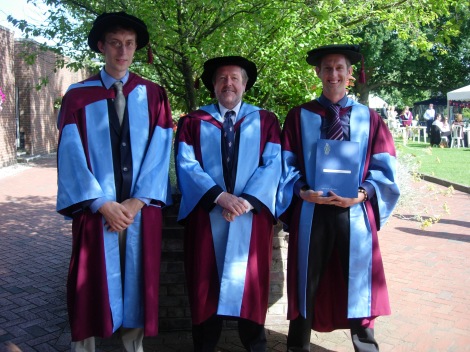 My PhD graduation with Keith and co-supervisor Paul Hughes. Southampton, 2008.

As an early career researcher, who is still slightly wary of standing up in front of fifty or more eager young undergraduates, I always like to give my lectures a consolidatory run-through the night before delivering them. One particular week, I gave a lecture on my speciality: peatland records of Holocene climate change. The lecture began with a brief history of the subject and featured several of the key figures that have contributed towards the development of the discipline since the late nineteenth century. This section concluded with a man I was lucky enough to work alongside whilst completing a post-doc at the University of Southampton – Professor Keith Barber.

The following day I gave the lecture, nerves vanishing as I got into the swing of things. I delivered the slides on Keith’s pioneering work of the 1980s and 90s, and his name continued to crop up as I discussed the on-going scientific contributions of his many PhD students. After the lecture, I distinctly remember reflecting on the exceptional and continued influence and inspiration that Keith had provided the subject and its researchers.

In the coming days, the sad news filtered through that Keith had passed away and, as I now realise, it happened on the evening that I had been practicing my lecture about his work. My unknowing tribute to him that day now seems fitting, and will continue to be delivered for the rest of my career.

I never got the chance to work directly with Keith, even though I feel that I have, but the role he has played in shaping my and many of my peer’s careers indirectly cannot be understated and for that I am most grateful. Keith’s personality was also the stuff of legend in the palaeoecology and peatland communities. Never one to shy away from giving an opinion or offering advice, Keith was at the very centre of the department (and its social events!) in Southampton until his illness became too much. He will be missed by many for his friendship as much as his research, and his name, you can be sure, will be toasted for many years to come with pint of ‘proper beer’, and every so often something a little stronger and a little ‘peatier’. 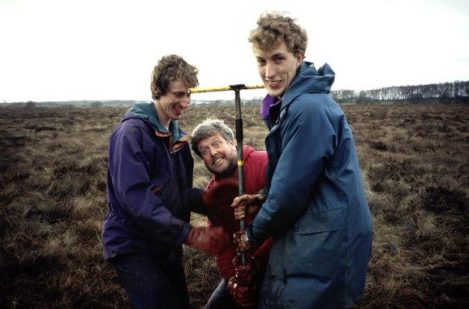 Keith doing what he loved best, some time in the mid 1990s, with then PhD students Paul Hughes and Dmitri Mauquoy (Credit: Langdon et al. in Quaternary International 268, 1-8).

Keith’s funeral was obviously a sad occasion, but was filled with tales of is great commitment to his work and his students and was attended by many of the academics from institutions around the UK that Keith worked with. Whilst Keith is no longer with us, it is undoubted that his lasting legacy lies in the many academics working in and around the field of palaeoclimate science that, each in their own way, have been influenced by him. We are both pleased to count ourselves in that number.

One response to “A tribute to Keith Barber”