If you’re a regular Bogology reader than you’ll already be aware of the important role peatlands play in the global carbon cycle. Whilst they cover just 2-3% of the earth’s surface, peatlands contain between a quarter and a third of all the organic soil carbon on earth (see our infogram, here). Estimates vary, but it is generally agreed that peatlands contain approximately 600 gigatonnes of carbon (GtC). To put that in context, it’s more than all the vegetation on earth (c. 560 GtC) and not too much less than the amount currently stored in the entire atmosphere (c. 850 GtC) [1].

Peatlands grow in any region where decomposition of the plant matter they contain is slowed down, typically by waterlogging or cool temperatures. Of course, there are significant amounts of peat in the warm and wet tropical regions. Carbon-rich peat provides a lush carpet for many of the world’s most famous rainforests in, for example, the Amazon, Indonesia and – as you may have seen in the news – central Africa, where researchers recently found a colossal peatland. However, the amount of carbon stored in these vast peatlands still pales in comparison to that which is found in the ‘circum-Artic’ – the vast area of land that wraps around the high-latitudes of the Northern Hemisphere. Owing to the relative imbalance in the distribution of landmass between the Northern (68%) and Southern Hemispheres (32%), particularly in terms of the colder and relative moist higher latitudes, the North possesses a far greater area of land conducive to the development of peat. 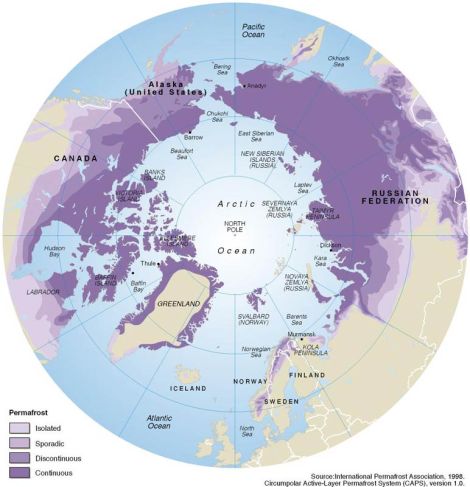 The distribution of permafrost in the Northern Hemisphere.

The peatlands in the circum-Arctic contain nearly 300 GtC, almost half of all the carbon stored in the entire world’s peatlands [2] and remain frozen as permafrost for most or all of the year. Whilst frozen, the carbon in these peatlands is rendered ‘inert’, locked in and protected from decomposition, which would otherwise lead to it being lost into the atmosphere in the form of carbon dioxide and methane – compounding already dangerous levels of greenhouse gases in our atmosphere.

Unfortunately this huge frozen carbon store is at serious and increasing risk.

The effects of global warming are now well documented across the world, but what many people may not realise is that different areas of the world are warming at different rates. The northern high-latitudes and the ecosystems within them are considered more at risk of rising temperatures than many other areas of the world. As a result of this on-going warming, zones of permafrost have retreated rapidly polewards in recent decades, leaving in their wake evidence of peatland degradation in the form of collapsed peat domes and thaw lakes as the land melts. The ultimate fate of permafrost peatlands and the carbon they contain remains uncertain, however, owing to a complex set of feedbacks between peat growth, hydrology and vegetation. 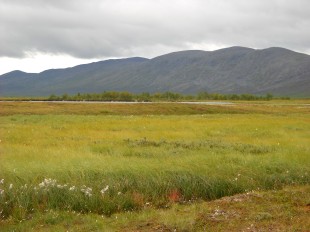 A collapsed and now inundated peat dome in Abisko.

Cottongrass growing at the edge of an arctic fen in Abisko.

Our recent paper, led by Graeme Swindles at the University of Leeds and published in Nature Scientific Reports aims to improve our understanding of permafrost peatland response to climate warming [3]. Because instrumental and observational records only go back a few decades in the region, we took peat cores spanning between 100 and 200 years from peatlands suffering at various stages of the thaw-driven degradation process in the Abisko region of northern Sweden. Here, we looked at how carbon accumulation had varied over this time period and by examining the shells, or ‘tests’, of moisture-sensitive testate amoebae that live in the water films of peatland plants we were able to reconstruct how water tables had fluctuated alongside these changes in peatland accumulation. 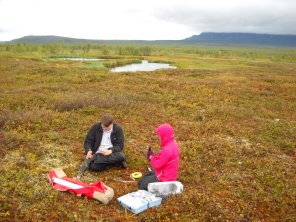 The Abisko region is a classic example of the damage being done by the warming climate. Here the average annual temperature is now above freezing – the permafrost is melting rapidly, and will eventually disappear completely. Our longer-term palaeoecological perspective on this process allowed us to produce a five-phase model outlining how we think permafrost peatlands are likely to respond to continued climate warming. Under increasing temperatures we found that intact permafrost peatlands begin to dry, with water tables and carbon accumulation both decreasing. At some point in this process a threshold state is reached and the peatland begins to degrade – cracking in the peat surface occurs and the link between climate and the peatland’s water table breaks down, lowering carbon accumulation further. At this point, the thaw has reached such a level that the peat dome collapses and becomes saturated by the underlying water table. This leads to the development of the final phase and common end point for thawing permafrost peatlands – an inundated artic fen. 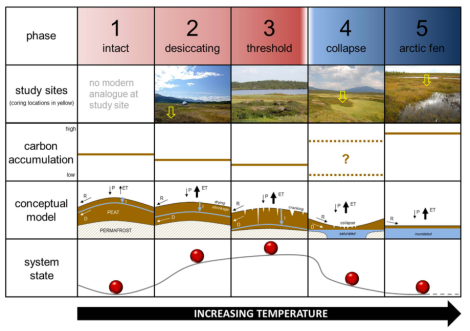 Interestingly, we found that carbon accumulation in these new systems was relatively high. That news might sound good, but it is offset by bad – the waterlogged conditions experienced in these fens are highly likely to cause elevated methane emissions. Methane is 28 times more potent a greenhouse gas than carbon dioxide [4] and subsequently these increased emissions could well lead to increased climate warming. We often call these sorts of processes ‘climate-feedback mechanisms’, but the phrase ‘vicious circle’ would do just as well.

One response to “Frozen peatlands in a warming world”