If the popularity of Tom’s blog on bog bodies was anything to go by, then the finer details of peatland archaeology can be pretty engaging! It’s not hard to see how amazingly preserved human bodies that met somewhat dubious ends rank as some of the more interesting things you can dig up from the murky depths of a peat bog, but they’re certainly not the only things. Peatland archaeology is rich in organic remains, all characterised by a stupendous level of preservation that makes it seem like time has stood still since their burial many thousands of years ago.

Take the delicate bracelet, woven cloth bag and wooden ear studs recently discovered in a 4000 year old burial on Dartmoor that provide a remarkable glimpse into Bronze Age life; the individual axe marks on wood, thousands of years old but still so fresh and vivid that archaeologists are able to use them to determine the specific cutting techniques used to make them; or, the leather shoes, clothes or baskets often found associated with those enigmatic bog bodies that provide an unprecedented insight into the daily lives of the people who wore or made them – the list could go on and on! The extraordinary preservation of organic remains, caused by the waterlogged, acidic and oxygen-free environment of a peat bog is, more than any of its other redeeming features, what has come to characterise peatland archaeology.

Aside from bog bodies, which are actually comparatively rare, peatlands are home to a range of other archaeological remains. Many of these take the form of wooden trackways, built in a variety of styles, from planks or twigs thrown haphazardly onto the peat surface to elaborate constructions with diagonal crossbeams, pins and raised walkways. Traditionally these trackways have been interpreted simply as paths from ‘A’ to ‘B’, put in place to cross an otherwise impassable route, or perhaps built to exploit the resources found on a peatland such as tart summer berries or bog iron. But was it really that simple? Trackways are often found associated with a range of other artefacts and unless you believe their past users to have been incredibly clumsy on a regular basis, it remains a distinct possibility that trackways were used as part of votive or, as Tom so aptly described in his bog body blog, sacrificial ceremonies.

Whatever their use, archaeologists and dendrochronologists (specialists in tree rings) can use the individual timbers taken from trackways to learn an incredible amount about how they were put together. For example, we now know that the Sweet Track in the Somerset Levels, a trackway some 5820 or 5821 years old (yes, the tree rings can be used to tell us the date the trees were felled to within two years!), was built from either end by different sets of workers, using slightly different construction techniques and wood from two different copses. So in this case, rather than ‘A’ to ‘B’, it seems like it was a case of ‘A’ and ‘B’ to meet in the middle, rather like a Neolithic Channel Tunnel!

Cross section of the construction of the Sweet Track (Credit: Richerman via Wikimedia Commons)

Remaining in the Somerset Levels for a moment longer, the peatlands there have also preserved the remains of several settlements, perhaps most notably the Glastonbury Lake Village. This was a busy and prosperous village back in the Iron Age, some 2100 or so years ago, when the Somerset Levels were a much wetter place than they are today and the village would have been perched on a dry island surrounded by open water and vast fringing Sphagnum bogs, with access by boat. At its peak, the village may have contained as many as 30 or so roundhouses, with a population of around 200, but as the local environment became gradually wetter over time people began to leave, with some making repairs to their houses in an attempt to stay a little longer. Eventually though, the village would have been swamped, covered in peat and laid there until discovered eventually by amateur antiquarian Arthur Bullied in the late 1800s. 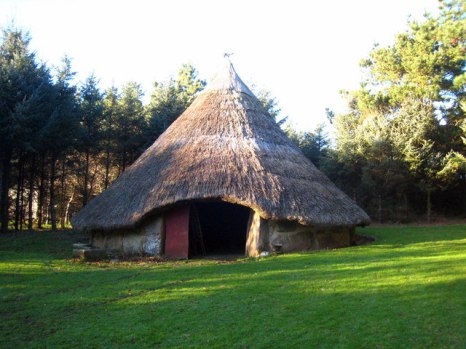 Reconstruction of an Iron Age roundhouse, similar to those found at Glastonbury Lake Village (Credit: Rod Allday via Wikimedia Commons)

Sadly, there’s an unfortunate irony at the heart of much peatland archaeology. In many cases, remains are discovered by workers milling the peat on an industrial scale or by peat shrinkage following drainage for agriculture. The very fact that something several thousand years old is now at the surface being dug up is testimony to the fact that several metres of peatland have already been removed or decayed. So as much as peatland archaeology is characterised by its amazing organic preservation, it’s very discovery is often a product of its near destruction, along with the ecosystem in which it is preserved – the peat bog.

Perhaps one way forward is to frame peatland (and as a result, peatland archaeology) conservation in terms of the ecosystem services peatlands can provide. Archaeological remains can be considered as a valuable heritage, cultural or possibly even tourism service. Other services provided by peatlands include those relating to carbon storage, biodiversity and flood regulation, but those are all stories in their own right. Management to benefit any one of these services will invariably benefit them all, leading to a ‘win-win’ situation.

Although historically a tragically high proportion of Europe’s peatlands have been exploited, cut away and irreversibly damaged (for example 94% of the UK’s raised bogs have been lost), at Bogology HQ we’re hopeful that attitudes are changing and there is a far greater recognition of the many and varied benefits of the humble peat bog. The groundswell of support for peat free compost (just search for #peatfree on Twitter and you’ll see what I mean!) and much greater recognition of peatlands as vital carbon stores are just two recent examples. The astonishing archaeological record of peatlands is perhaps another benefit that requires a shout out!

The book ‘Somerset’s Peatland Archaeology: Managing and Investigating a Fragile Resource’ by Richard Brunning is a detailed account of the archaeology in that region, including the Sweet Track and Glastonbury Lake Village. As well an inventory and description of individual sites, it provides an important insight into their management into the future.

‘The Lake Villages of Somerset’ by Stephen Minnitt and John Coles, published by the Glastonbury Antiquarian Society in 1996 is an accessible introduction to the Iron Age settlements in the Somerset Levels.

This lecture by IUCN peatland programme research manager Mark Read highlights some of the issues facing peatlands in the future and how these can be addressed.