Peat bogs are beautiful places. From the intricate patterns of a Sphagnum leaf up close to the sharp and colourful contrasts created by the different species on the bog surface, the beauty contained in just a few square metres of peatland never ceases to amaze me. If you’re happy enough to sink in the middle of a soggy peat bog on your hands and knees, as I seem to be, you can see the individual drops of sticky mucilage (it’s prettier than it sounds) glinting in the sun at the tip of each tentacle of a sundew, resembling drops of the morning dew that gives the plant its name.

A sundew, Drosera uniflora, from Patagonia

On top of that, peat bogs frequently occur in some fairly dramatic and beautiful landscapes. From the foothills of the Andes to the vast spruce forests of Alaska, my job as a Bogologist has taken me across the world in search of peatlands and as a result I’ve found myself in some of wildest places on earth.  We hope that by exploring Bogology you’ve been able to see some of our photos that demonstrate the range of textures, colours and patterns that can be found on a peat bog and some of the stunning landscapes in which they can occur.

Peatlands create clearings in the spruce forest of the Brooks Range, Alaska

Despite the fact that these ecosystems are bursting with life, colour and beauty they have still been portrayed over the years as sodden, inert, miserable and sometimes even sinister places. They’re definitely wet, I’ll give them that, but here at Bogology HQ, we believe it is our duty to show the other, more magnificent, side of peat bogs.

On a recent trip to Vienna’s Belvedere gallery (more famous as the home of Gustav Klimt’s ‘The Kiss’) I found myself risking the wrath of the militant gallery attendants to take a quick snap of a painting by Eugen Jettel, an Austrian landscape painter of the late 19th century. The painting in question (below), entitled ‘Moorlands’, was painted in 1879 and shows a flock of crows passing over a heavily damaged peatland capturing perfectly the sad reality that many European bogs have been exploited for fuel and agricultural purposes for many centuries.

In fact, the majority historical paintings of peatlands depict them in the context of ‘turf cutting’, the act of cutting and drying peat for personal use as winter fuel or for small financial gain. The practice was an arduous task but was a legal right and a common activity in the countryside in the 19th century upon which many rural families in the Ireland, Scotland and elsewhere in northern Europe relied.

Two pieces, currently part of the Tate Collection, document this aspect of rural life well. Firstly, a painting entitled ‘Turf Cutters’ by Thomas Wade (c. 1869; below) shows the back-breaking nature of this work taking place in his native Lancashire. Here we see a small group, heaving turf, bent double and hauling barrows full of beat. The physical exertion is evident in their bodies and faces and the landscape they are working in appears close to industrial. 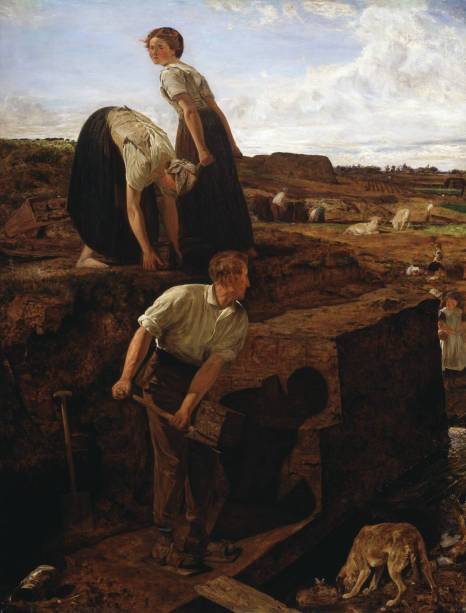 Secondly, an etching entitled ‘Peat Bog, Scotland’ by J. M. W. Turner (below) was completed c. 1808 and shows a wider scene with a group of labourers under a brooding sky, cutting and stacking peat from what appears to be a blanket bog in the Highlands.

In his seminal book ‘Modern Painters’, John Ruskin suggests that Turner had grown tired of the affectation conveyed by Italian and Dutch landscape artists and chose, in this piece, to portray a pessimistic atmosphere not of ‘happy rural toil’, but rather the ‘patient striving with hard conditions of life’, with the people depicted here described as ‘wretched, battered, torn and tortured by their fate’. This impression seems to fit well with the place occupied by peatbogs in society of the time’s general consciousness.

A more positive interpretation of the piece may be seen, however, in the threatening sky that dominates the image. Although seemingly dark and sinister, Turner’s most famous skill as the ‘painter of light’ is showcased excellently here, allowing for a hint of something more optimistic to pervade. It is suggested that Turner ‘may have felt that there were elements in the life of the Highland poor – strength of soul, rugged intelligence, faithful imagination – which redeemed its misery; and, so feeling, have made the storm to pass away and the rainbow to enlighten the mountains’.

Turner’s etching is undeniably beautiful but it retains the underlying connotations of hard labour, poverty and an unforgiving landscape. Thankfully, as the ecological importance and beauty of peatlands has been recognised since the time of these three pieces, our artistic impression of them has grown to reflect this. In the next blog in the ‘Bogs are beautiful’ series we hope to showcase some modern artists who’s work seeks to look beyond these ‘traditional’ impressions of peatlands in an effort to convey their splendour to a wider audience.