We were quite surprised how quickly we could brainstorm a range of options of our peatland A-Z. This version is just one of many possible iterations so watch out for others in the future!

A – Acidic: Although pH varies between different types of peatland, on the whole ombrotrophic peat bogs are acidic places. Coupled with low levels of oxygen, their acidic nature is one of the key factors that suppresses decay and results in peat accumulation itself, as well as the preservation of other types of remains such as…

B – Bog bodies: Human bodies that have been preserved in the acidic, anoxic environment of peatlands, often for thousands of years. Many met distinctly grizzly deaths. Read more in our blog ‘Severed heads and shattered skulls: the darker side of Bogology’.

C – Carbon: Peatlands represent an important store of carbon, covering only 3% of the earth’s land surface, but containing about a third of its soil organic carbon. Research is ongoing to understand the multiple factors affecting peatland carbon storage over time and whether this store may turn into a carbon source or sink under future climate change.

D – Dating: Any research we do using peatland core samples to investigate the past is heavily reliant on the quality of dating we have on those cores; without a timescale it is hard for us to place the changes in our cores in context and compare them to other studies. The primary dating methods we use are radiocarbon and tephra.

B – Bog bodies, this one is called Tollund Man (Image from Wikimedia Commons)

F – Fuel, a photograph taken by Keith Barber of a long hand cut ditch at Bolton Fell Moss in 1967. Piles of stacked peat turfs can be seen to the left of the ditch. Thanks to Keith for allowing us to use this image.

E – Education: We set up Bogology to provide an educational outlet for our peatland research. We hope that over recent years, the important role of peatlands as an ecosystem, including as a “carbon trap, cistern and history classroom” is becoming more widely known, which may result in a greater appreciation of and greater protection of these wonderful ecosystems!

F – Fuel: Peat has been a traditional source of fuel in many countries, including Ireland where hand cutting of peat for burning in the home is still practised in some rural areas. Peat is even burnt at an industrial scale in peat-fired power stations in Ireland and Scandinavia.

G – Gardening: Unfortunately, peat is still used as a growing medium in the gardening industry, though recently there have been many campaigns and even government policies to change this. Extraction of peat for use in horticulture is a threat to the survival of peatlands in some countries. We support the ‘I don’t dig peat’ campaign, which aims to highlight this issue.

H – Holocene: The time period covering roughly the past 11,500 years since the end of the last ice age. It is primarily this period that we study since most existing peatlands only started accumulating once the climate had warmed up from its previous icy grip.

I – Indonesia: Tropical peatlands represent a significant chunk of the global peatland distribution and are unsurprisingly very different to their northern cousins, being predominantly forested. Peatlands in Indonesia in particular are under threat from drainage, land use change and fire. Read more on our blog here.

J – Jamaica! Peat is found in many parts of the world where you wouldn’t necessarily expect it! Jamaica is one of those. The Antarctic is perhaps another – although only 0.3% of the Antarctic land surface is ice free, moss banks have been growing there in some locations for thousands of years and can be used to study past climate change. Read more on our blog here.

K – K (Potassium): Potassium is one of a range of different nutrients that can be deposited from the atmosphere onto an ombrotrophic bog. Its deposition is often linked to changes in plant communities on the bog surface and this can have a knock on effect on the ability of a peatland to sequester and store carbon.

L – Lawn: Along with hummock and hollow, a lawn is one of the three main features you might find on the surface of a bog. A lawn is a low-lying flat area of moss, often rather wet, but also the preferred coring location for our research. A hummock is a small, drier hump with mosses growing further away from the water table, whereas a hollow is a very low and wet part of the bog surface, often between hummocks and rather muddy with fewer mosses.

M – Moss: What bogs are made of! In the research we do the main peat forming moss is the genus Sphagnum. You can read much more about this wonderful plant in our blog here.

N – Nutrients: Bogs are generally nutrient poor places and an ombrotrophic bog receives all its nutrients from atmospheric deposition. Nutrient limitation is therefore an important factor determining peatland vegetation and small changes in nutrient deposition can have comparatively large effects. Given that it also begins with N, we will highlight nitrogen as one of the nutrients playing a particularly key role on peatland functioning.

W – water table depth, as reconstructed using testate amoeba, such as this one called Nebela carinata 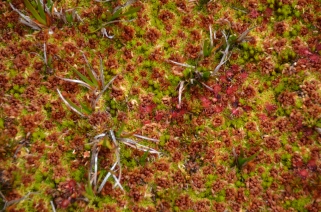 M – moss, this image is of Sphagnum moss, a bog plant extraordinaire!

Coring in action in Patagonia

P – Palaeo: Palaeo basically means ‘past’ and is a commonly used prefix in our line of work, placed in front of words like it is going out of fashion! Palaeoclimate and palaeoecology are two of the more common.

R – Russian corer: One of the key tools of our trade, the Russian corer is the peatland fieldworker’s tool of choice for taking core samples. Relatively simple to use, the corer can be extended with poles to reach peat that can be over ten metres below the surface and perhaps more than 10,000 years old!

T – Tephra: Tephra is volcanic ash. It is ejected from volcanoes during eruptions and we can use it in two main ways. Firstly, if we know the ages of past eruptions, we can use the layers of tephra that we find in our cores as a dating tool. Secondly, if we find the same tephra layer in several different cores from different bogs, we can use them to correlate between cores, as we know for sure that they are exactly the same age. Read more on our blog here.

U – UK: We might be biased, but the UK could claim to be one of the ancestral homes of peatland research into past climate change (Scandinavian readers may wish to protest!). It was in the UK that Professor Keith Barber undertook key research in the 1970s and 80s, at a bog called Bolton Fell Moss in Cumbria, which showed that peat stratigraphy has been primarily influenced by climate in the past. Read more about that story in our blog here.

V – Vegetation: Peatlands are home to a surprisingly diverse range of vegetation, often dominated by Sphagnum mosses, but also including grasses, sedges and ericaceous plants such as heather. Berries such as cranberries and blueberries are also found naturally on bogs and like the acidic soil. We can use past changes in vegetation to study past climate using a method known as plant macrofossil analysis.

W – Water table depth: Bogs are wet places and our research often focuses on past changes in bog hydrology. This is often represented by the measure of water table depth, especially when using testate amoebae as a method to reconstruct past climate.

X – X-ray fluorescence: Or XRF as it is also known is a method that can be used for elemental analysis of peatland cores, for example to research the effect of heavy metal deposition, which has been linked in past research to major changes in peatland vegetation. XRF machines are usually very large lab-based affairs, but this recent research (click here) used a field portable XRF to examine the effect of lead pollution on peatlands.

Y – Years: Time is central to our research into past climate change. We’ve already mentioned the importance of good dating, but it cannot be overstated! We are often up against time in laboratory too, as our research, often involving many hours sat analysing samples down a microscope can be rather time consuming in itself!

Z – Zoochlorellae: There are never many options when you get towards the end of the alphabet are there?! Zoochlorellae are a type of algae that often live in a symbiotic (mutually beneficial) relationship within the cytoplasm of a testate amoeba. Testate amoeba are themselves preserved in peat sediments and we can use them as a method to study past climate and hydrological change on peatlands.