Can pristine, undrained bogs burn? Looking at the soggy surface conditions of most northern peatlands, it may be hard to believe that, even in a natural state, they can actually burn. Perhaps it is even more surprising to learn that the ones that can burn most frequently and severely are located in the colder regions of the global peatland distribution. 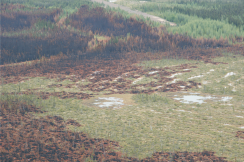 The shadow of a past burn. 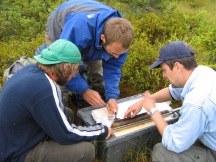 Simon examining a core in Quebec.

The peatlands of North America form a major part of the global peatland area, comprising about a third of the global peatland carbon pool. Many North American peatlands are located in boreal forests, where coniferous trees dominate the landscape. Since the onset of the Holocene, these peatlands have developed over millennia under continental climate conditions: relatively warm summers and cold, harsh winters with low precipitation. As a result of these extreme climate conditions, peat accumulation is limited to a growing season of only a few months and in the northern parts, patches of permafrost may occur in the form of peat palsas. In the coniferous forests surrounding the boreal peatlands, fires are frequent and intense and, more often than not, ignited by lightning. The occurrence of fires may be explained by the dry, warm summers, but also because of specific tree adaptation: jack pine (Pinus banksiana) and to a lesser extent black spruce (Picea mariana) need the intense heat for seed release and regeneration. 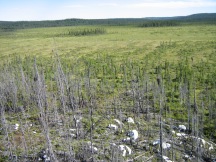 Evidence of an old burn at the bog edge. 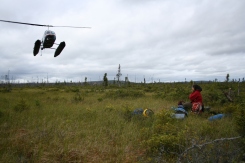 Helicopters are the only way to reach these remote bogs.

The Canadian boreal peatland zone runs from eastern to western Canada. Going westward, climate becomes generally drier and the peatland vegetation cover changes from open Sphagnum bogs with shrubby hummocks and wet hollows in Quebec, to spruce-covered bogs in northern Alberta. Although forest fires are frequent in the entire Canadian boreal zone, peatlands are affected more frequently in western Canada because of the differences in vegetation cover. In the western part, peatlands have burned as frequently as the neighbouring uplands during the last couple of decades.

Fires directly release carbon to the atmosphere by combustion, but they also influence the functioning of the ecosystem in the long term. Fire and charcoal production alter the soil microclimate and microbial populations (e.g. testate amoebae) and therefore respiration dynamics. As fires may burn live vegetation and/or litter as well as peat, the carbon balance of the peatlands is negatively influenced by recurrent fires. About 3 kg of carbon per metre squared can be released from a peat bog per fire in western Canada, which means that under the current climate conditions these bogs are only small net sinks of carbon. With ongoing climate change and more peat being burned, these bogs may even become net sources in the near future.

The situation is somewhat different in eastern Canada. During my Ph.D. research at Université du Québec à Montréal, I analysed peat cores from three open bogs from the Eastmain region in the heart of the spruce-dominated boreal forest, searching for evidence of peat burning and possible effects of varying fire regimes on peat carbon sequestration during the Holocene. In short, peat burns here too. However, peat fires are much less frequent than in western Canada and do not seem to affect the deeper peat. Therefore, fire has been a minor factor in the development of these peatlands, especially when compared to other external variables, of which Neoglacial cooling may have been the most important one.

A spectacular aerial view across the bogs in Quebec.

Charcoal from past burns in the peatland record. 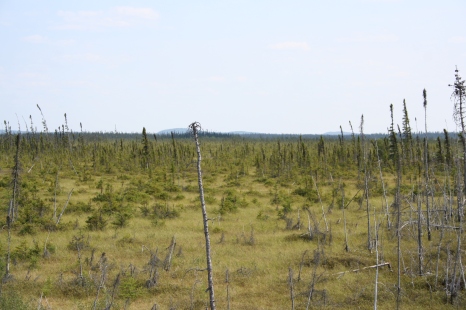 A view across the bog in Quebec

Burning patterns can be highly variable at the ecosystem scale as well. In sites with micro-topographical features, hollows generally lose more organic matter by combustion than hummocks. The explanation for this lies in the nature of the hollow vegetation. During dry periods, hollows dry out much more rapidly than hummocks, because of the ‘loose’ nature of the Sphagnum species found here and their low potential for water retention, while the dense Sphagnum cover of hummocks retains humidity more effectively. Therefore, in these peatlands, hollows tend to burn more deeply.

Looking at the complex spatial and temporal patterns of peat fire occurrence, it may seem difficult to forecast peat fire regimes with ongoing climate change. In general, larger areas of forest will be affected and fire occurrence and fire season length are anticipated to increase for most of the Canadian boreal regions. One could argue that if forest fires become more frequent, peatlands too may burn more often. However, the sensitivity of peatlands to burning may not depend on the same meteorological variables that determine the sensitivity of forest stands. Alternatively perhaps, peatland vegetation, rather than weather, may be a critical factor. Either way, the fire regimes of boreal peatland regions are likely to become an increasingly important factor in the estimation of future carbon fluxes from natural sources.