Gather round friends, it’s time for a rather gruesome Bogology tale… I hope you’re not reading this over your breakfast.

It was a late spring morning in 1983 when they found her. Andy Mould and Stephen Dooley worked at the Lindow Moss peat works in Cheshire, northern England. This lowland raised bog once covered approximately 600 hectares, but was being gradually eaten away by industrial peat harvesting. A strange object wobbled along a conveyor belt that transported peat, cut from the bog surface, to a shredding machine. Andy stopped the belt to take a closer look. At first the men joked that they’d found a dinosaur egg, but as the peat began to peel away they realised they had a rather more gruesome discovery in their hands. It was a severed human head, complete with its hair and one accusatory eye, staring straight at them.

The police arrived, suspecting that the head may belong to a woman who had recently gone missing from the area – a man had boasted to people that he’d killed his wife and buried her in the back garden, which backed on to a peatland. On hearing of the macabre find, the husband confessed to the police in a fit of panic and was subsequently charged, convicted and imprisoned for her murder. He may have regretted his haste, however, when radiocarbon dating revealed that the head was in fact nearly 2000 years old.

Andy Mould could be forgiven for thinking that someone was playing a cruel prank on him when, just over a year later, he threw what he thought was a stick from the peat conveyor belt at his workmate. When the ‘stick’ hit the ground, the peat fell off and revealed something all together more grisly – a well-preserved human foot! This time, further searches were undertaken and the body to which this foot belonged was found – and it was in remarkable condition. ‘Lindow Man’, or ‘Pete Marsh’ as he was originally known, became one of the most famous ‘bog bodies’ in the world and was heralded as the most significant archaeological find of the 1980s as radiocarbon dating revealed that he too was approximately 2000 years old.

Since the discovery of Lindow Man, the remains of two other individuals have been found at the site taking the population of this particular peaty grave to at least four.  As strange as it might sound, however, the discovery of identifiably human remains in peat bogs is not that unusual. A combination of relatively low temperatures, a lack of oxygen and high acidity – the same reason plant macrofossils, pollen and testate amoebae are preserved – effectively pickles the bodies. The level of preservation witnessed in some cases is spectacular, allowing us to work out what the person was wearing, what they’d last eaten and, more morbidly, how they’d met their end.

Ironically, the police who turned up when the Lindow Woman’s head was found in 1983 were probably right to suspect foul play – they were just 2000 years too late. Murder, and perhaps even ritual sacrifice, is a common theme in the bog bodies of northern Europe. Lindow Man, for example, was found to have suffered a sickening blow to the head, which had shattered his skull, driving shards of bone into his brain. If that wasn’t enough, his throat had also been cut. ‘Tollund Man’, discovered in a bog in Denmark, was found strangled with a garrotte still around his neck. One of the ‘Weerdinge men’, found near Drenthe in the Netherlands, had had his stomach sliced open to allow his intestines to spill out. Archaeologists suggest this may have been for the purposes of divination, with someone ‘reading’ the poor man’s entrails to predict the future. 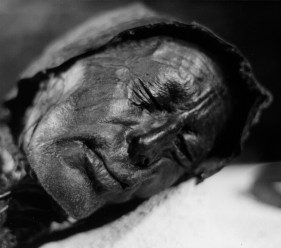 B – Bog bodies, this one is called Tollund Man (Image from Wikimedia Commons)

But enough about entrails. Peat bogs don’t just preserve bodies – they’re incredibly important archives for other archaeological artifacts and information. Although Matt and I now primarily study the relationship between peatlands and climate change – past, present and future – our first forays into Bogology, coming during our respective undergraduate degrees, came via the discipline of ‘environmental archaeology’. We looked for biological information, preserved in the peatland records of Dartmoor, to help better understand the relationship between humans and the landscape. There are larger archaeological finds to be reclaimed from the peat, however, such as the Second World War Spitfire found in Donegal, Ireland. It was so well preserved that its machine guns still fired!

We’ve got some great guest blogs lined up to cover some of these archaeological topics in more detail – so stay tuned!

The Tollund Man: a face from prehistoric Denmark

Bodies of the Bogs (Archaeology Magazine)

9 responses to “Severed heads and shattered skulls: the darker side of Bogology”