Matt and I have been extremely lucky in that our jobs as Bogologists have taken us to some fairly amazing places. I’ve already blogged about my trip to Alaska this summer, as has Matt about his trip to Antarctica, but I also have my own tales from the South to tell!

In early January I boarded a plane at Heathrow and begun the 36-hour, 8000-mile journey to Punta Arenas, Chile, the southernmost city on mainland South America. Here we spent a few weeks travelling around the area, collecting samples and cores from a number of peat bogs for our new NERC-funded PATAGON project. There was one place we visited, however, that has stuck with me in terms of the landscape and its story. 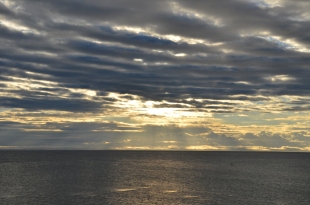 An uncharacteristically calm Strait of Magellan

A herd of Guanaco 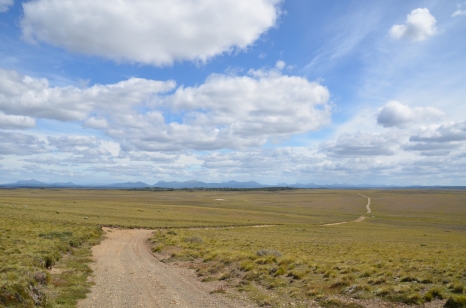 The island of Tierra del Fuego, at the very southern tip of South America really is a land of two halves. I may have butchered a footballing cliché there but I think the Chileans and the Argentineans, who both own one half of the island, would forgive me, as they’re both famously fanatical about their national game!

This division (whoops!) is caused by the strong rainfall gradient that falls across the island. The southern and western portions of the island, dominated by the Southern Andes, receive most of the rainfall and, combined with the relatively cool temperatures experienced in the region, present ideal conditions for peat bog development. The northern and eastern parts of the island, on the other hand, are in the ‘rain shadow’ of these towering mountains and so the landscape there is more reminiscent of desert scenes from an old Wild West movie – there’s certainly no peat anyway!

So after crossing the iconic Strait of Magellan, which separates Tierra del Fuego from mainland South America and was famously navigated in 1520 by the Portuguese explorer from which it derives its name, we enter a mysterious world of rolling hills, semi-arid grasslands and mile upon mile of dirt roads. After many, many hours of driving, the mountains appear, seemingly out of nowhere and everything rapidly turns a darker shade of green. Before long we start to catch glimpses of what we came all this way for – peat!

Our destination was a vast expanse of land called Karukinka Natural Park. Amazingly, this chunk of land, 50 times the size of Manhattan, New York, was presented to the Wildlife Conservation Society in 2002 by Goldman Sachs after the Wall Street investment banking company discovered it owned the land after acquiring the assets of a recently bankrupted logging company.

Peat, glorious peat – as far as the eye can see

The landscape of Karukinka is like something out of a J. R. R. Tolkien novel – snow-capped mountains rise sharply out of lush green southern beech forests and valley floors are covered in a thick, rich carpet of bright orange peat for as far as the eye can see. Meandering rivers, teaming with brown trout, snake through the peatlands as herds of Guanaco, a type of wild llama, thunder around, spooked by some unseen shadow lurking in the forest. Meanwhile, the whole magnificent situation is surveyed and overseen by the gracious Andean Condors that effortlessly soar overhead.

When Charles Darwin first set eyes on southern Tierra del Fuego it is clear that he had similar feelings of awe. Of the landscape, which hasn’t changed too much in the close to 200 years since he first saw it, he said:

“A single glance […] was sufficient to show me how widely different it was from anything I have ever beheld.”

When he actually came to set foot on the land, his feelings were clearly more mixed, however:

“Everywhere […] the surface is covered by a thick bed of swampy peat. Even within the forest, the ground is concealed by a mass of slowly putrefying vegetable matter, which, from being soaked with water, yields to the foot.” 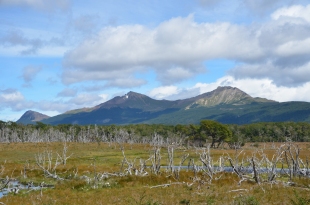 A guanaco lurking in the shadows

Nothofagus at the bog edge

Of course it was this “slowly putrefying vegetable matter” – as Darwin so eloquently puts it! – that we had come all this way to see. However, it is often said that the journey is half the story and in the case of this blog post, that is certainly true – we’ll be posting the second half of this story very soon, so stay tuned if you want to find out more about the bogological work we got up to in the southernmost Sphagnum peatlands in the world!

Finally though, its interesting to know that the name ‘Karukinka’ comes from the traditional name given to this unique place by the sadly now extinct Selk’nam tribe, who inhabited the region prior to European colonisation. Crudely translated, Karukinka means ‘our land’. Although the original inhabitants of this beautiful landscape are gone, the Wildlife Conservation Society are doing everything they can to preserve it for future generations. For geologists, biologists and bogologists – just like us – but also for anyone who just wants to experience one of the World’s few remaining wildernesses.

There are still pockets of ‘our land’ left – wild places where little has changed for thousands of years – you just have to seek them out. Luckily, Karukinka is still one of them.

2 responses to “Karukinka: a journey to the South (part 1)”