Traditionally, Bogology has mainly taken place in northern Europe and North America. In these regions botanical understanding is plentiful and easily available and, as a result, we know all about the plants present in the bogs and fens in both areas.

But as Bogology expands into new regions (e.g. my current project in southern Patagonia) we find that we know far less about the types of plants, including their ecological preferences, that we might find on the bog surface and also in our subsurface cores, preserved as ‘macrofossils’.

We’re not the first people to work on the bogs in southern Patagonia by any means, but the knowledge that is so readily available in the Northern Hemisphere cannot be rivalled by the small collection of books and papers that we have managed to amass. So, we are faced with a challenge – much of this literature is in Spanish too – but then it wouldn’t be science if it was easy! Besides, I’ve always said I wanted to learn a second language!

Luckily, several early explorers have done some vital groundwork for us. In the late 18th and early 19th centuries a series of survey expeditions set off from western Europe to explore the world. On board were biologists, geologists and anthropologists determined to record as much as possible about the unexplored regions of the world. The most famous of these missions was probably the ‘Voyage of the Beagle’ which set sail from Plymouth Sound two days after Christmas in 1831. Five long years later, the ship returned safely to Falmouth, Cornwall, with a bounty of samples, stories and notes from South America, the Galapagos, New Zealand, Tahiti and Mauritius. Other similar voyages took place throughout the period, with most returning with similarly valuable scientific cargo. During these trips, thousands upon thousands of plant specimens were taken, many of which are now stored in the Herbarium at Kew.

The Herbarium at Kew

Inside the Herbarium at Kew

There are probably just over three hundred thousand species of plant in the world, but no one is really sure. It is only when we consider that the Herbarium at Kew houses approximately seven million plant specimens, either in dried or ‘pickled’ form, that we can appreciate what a valuable resource it is. There are examples of over 98% of all the worlds plant species safely stored in this small corner of West London – it is the biggest collection of its type on earth.

The building in which the Herbarium is housed is impressive to say the least, as is the library which contains all the obscure plant-related literature you could ever hope to lay your hands on. But the herbarium collection itself is, on first impressions, rather unremarkable. It is not until you open the first cupboard door, bursting at the seams with plant specimens, that you realise that the archives that inhabit these corridors, which seem to go on forever, represent a botanical treasure trove to which it would be impossible to assign a monetary value. Despite this sheer wealth of specimens, the herbarium is in perfect taxonomic order. The collection is, quite simply, irreplaceable and represents, together with the Kew’s Millennium Seed Bank at Wakehurst, one of the most important scientific resources in the country, if not the world. Furthermore, the pioneering work of these early explorers has been continued ever since and amazingly the collection at Kew is still growing. 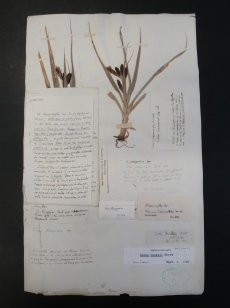 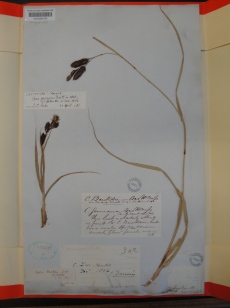 An interesting signature at the bottom of this specimen…

Close examination of a plant specimen

As I leaf through the herbarium specimens, identifying plant species that I may be likely to encounter on the bogs of southern Patagonia, I come across many famous signatures including that of a certain ‘C. Darwin’ – the history of this collection is incredible.

Anyway, it’s a slow job but I’m getting there. After spending a few days photographing and examining plants at the Herbarium, I found myself in a much better position to confidently identify different species in the field, using my newly obtained knowledge to take surface vegetation samples for my own specimen collection. It might take 20 years or so to rival the one we have got for northern Europe though, so it’s a good thing I’m only at the beginning of my career!

Keep an eye out for more on my adventures in Tierra del Fuego next week – together with a few choice observations from the travel journals of my old friend Charlie Darwin! If you just can’t wait that long, read this!