Picture the scene: it’s a hot summer’s day, you’re relaxing in the sun but there are wasps flying around your head, interrupting your peaceful repose. Annoying, right? The solution? A glass of beer, washing up liquid or some other sweet, sticky substance will lure the buzzy irritations to their doom, leaving you to top up your tan in peace.

[Apologies to wasp lovers out there, I’m just painting an imaginary picture here. No wasps were harmed in the writing of this blog – MA]

Like all the best ideas, this simple insect trap has its roots in nature – and like all the best things generally, there’s a bog involved. The pitcher plant is our culprit in this case.

Purple pitcher plant in a sea of Sphagnum

I was a kid growing up in the 80s, when venus fly-traps were kind of cool, perhaps inspired by the rather appalling musical and film Little Shop of Horrors. Until I stumbled onto a central Nova Scotian bog many years later, I hadn’t really given carnivorous plants much extra thought.

But what were these deep red, mottled, cup-shaped plants I now saw, poking their heads out from the Sphagnum? Closer examination revealed a deep well of liquid (mostly rainwater with the addition of narcotic digestive juices) overtopped with a curved leaf. Small insects floated helplessly within, having slipped on the greasy edges and been prevented from escape by downward facing fine hairs. And so I was introduced to the ‘pitcher plant’, in this case the purple pitcher plant (Sarracenia purpurea). We were in Nova Scotia at the time, but the purple pitcher also proliferates in Canada’s other Atlantic provinces and has been Newfoundland and Labrador’s floral emblem since the 1950s. Whilst native to North America, the purple pitcher plant can also be found on my side of the Atlantic, having been introduced to Irish bogs in 1906.

Onwards we moved to southern Nova Scotia, hunting out bogs suitable for our research. Here we found yet another of the peatland’s deadly killers – the innocent-looking thread-leaved sundew (AKA Drosera fililformis), an endangered species in Canada found only in a little corner of Nova Scotia. This was a much more delicate plant with thin, slender leaves covered with short pin like tentacles, each one topped with a tiny droplet of sticky, acidic, non-evaporative liquid ready to ensnare their prey. When an insect lands on the leaf it will curl up, trapping the unsuspecting midge and releasing digestive juices as corrosive as battery acid to dissolve and digest it.

A sundew, Drosera uniflora, from Patagonia 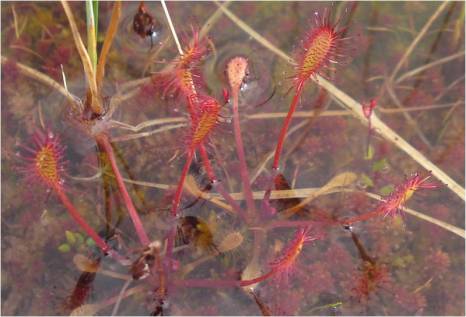 Spoon-leaf sundew (Drosera intermedia) growing on a bog in Canada

These two examples of carnivorous plants growing on peatlands only scratch the surface of the diversity out there. The inherent dampness of peatlands attracts swarms of insects and, let me tell you from bitter experience, many are of the biting variety and quite aggressive. Yet the pitcher plants, the sundews and many other species of carnivorous plant sit patiently and await this prey, quietly but effectively luring them to a sticky demise. Each plant might catch little more than a handful of insects each month, but alongside photosynthesis, that provides them with enough nutrients and energy to flourish. We’ve talked elsewhere about how the peatlands we study are typically very nutrient poor. The carnivorous plants make up for this by ingesting nutrients such as nitrogen and phosphorous from their prey and so represent a fascinating adaptation to an environment in which it often takes a bit of lateral thinking to get on in life.

Finally, it seems that the wonders of these plants may stretch beyond their boggy environs. A study published in 2010 in the Journal of Nanobiotechnology found that the extremely elastic, gluey liquid from sundew leaves may have biomedical tissue engineering applications, for example in helping to seal wounds after surgery or even decreasing the chances of rejection in organ transplants.

In writing this blog, I learned a lot from an excellent post by the Irish Peatland Conservation Council. Click here to read it.