This blog has been inspired by a question posed through our Ask a Bogologist page, so thanks very much to Miles for getting in touch and we hope this answers your question! If anyone has other questions or blog topics they would like to see covered then please get in touch. 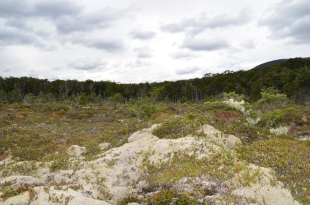 Lichens on the bog surface in Patagonia.

Lichens can dominate in dry conditions.

Lichens are organisms made up of two symbiotic (mutually beneficial) partners – a fungus and either an algae or type of bacteria. With divorce rates around the world soaring, we could all learn a thing or two from the humble lichen! The fungal partner protects the algal or bacterial partner by retaining water and a host of other functions and in return the algal or bacterial partner provides the ability to photosynthesise, feeding both partners. A match made in heaven! For the fungus, this relationship is biologically essential. On the other hand, most of the algal partners are capable of living alone – but like any good relationship, having a partner allows them to live a more fulfilled life – in this case surviving in more extreme or different habitats than a free living algae could tolerate.

Because lichens are formed of two partners, there are an enormous number of possible combinations, making the lichens a remarkably diverse and hardy group, taking on a wide range of forms (some of which are known in the lingo for example as foliose, crustose and fruticose, or to you and I – leafy, crusted or branched) and capable of surviving in an enormous range of environments and in some pretty extreme conditions. This is in part due their ability to shut down (a state known as stasis) in extremes of temperature or drought. 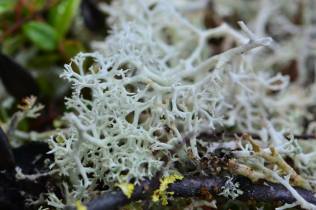 Colourful lichen on a rock in Newfoundland 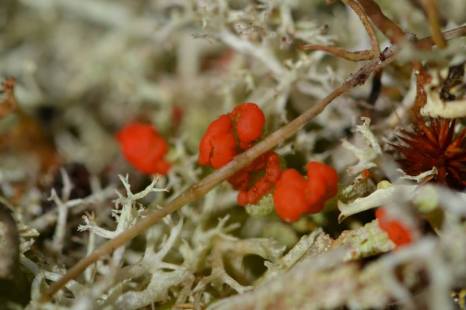 The growth forms of lichens that we would look at and think of a leaf or shoot are known as thalli (singular: thallus). The size and growth rates of thalli can be used in a dating technique known as lichenometry. This technique has been applied, for example, in the Antarctic Peninsula, where I am currently undertaking some research, to show that lichen growth rates have increased in concert with recent temperature increases. We found the same thing for moss growth rates in a moss bank core from Lazarev Bay, near the southern end of the peninsula. Lichens are also commonly used as indicators of air pollution or cleanliness with different species being either very sensitive to or tolerant of, different pollutants such as nitrogen or sulphur dioxide. This video from the Natural History Museum explains more. 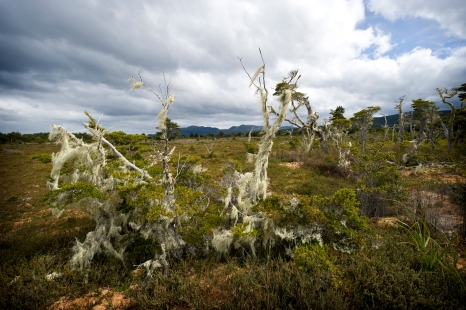 In terms of the work we do developing records of past climate change, lichens tend to play a relatively minor role. The most common lichens on raised bogs are from the genus Cladonia (cup lichens) and they tend to grow in much drier locations on the bog surface such as hummocks, though not always. When dried out they are very crisp and quite friable if accidently stood on! Other species of Cladonia, also known as reindeer lichens, are an important food source for, you guessed it, reindeer and caribou in the Northern high latitudes of Scandinavia, Siberia and North America.

Often, if a bog is experiencing a drying trend, whether through the influence of climate or human-induced drainage or other impacts, then lichens will be much more common. However, because they are so fragile, they are rarely preserved at depth and are only really found towards the very tops of our cores. When we carry out plant macrofossil analysis, this is a limitation, because it means that the results from our core samples may not be telling the full story – if we find lots of remains of plants that prefer dry conditions, it’s possible that when they were growing at the surface, lichens were growing there too – but sadly we’ll never know.