In contrast to Matt and Tom, I’ve come to Bogology from a biological background and I’m interested in the physiology of plants: the science of how plants work. More specifically, I’m interested in how  plants respond to environmental changes, particularly mosses. Even within the Plant Sciences department, at Cambridge University, working with moss is unusual as most of my colleagues either work on the so-called ‘model plant’ Arabidopsis thaliana, algae, or on computer models of forests or plant diseases.

Mosses are frequently neglected, ignored, and even purposefully expunged from lawns but as has already been discussed in the case of Sphagnum, mosses have several amazing properties (including being useful in place of toilet paper since at least Viking times!).  The beauty of mosses is not lost on everyone, however. Japan’s famous Saihō-ji  temple near Kyoto, an UNESCO World Heritage Site, features a beautiful and celebrated moss garden. 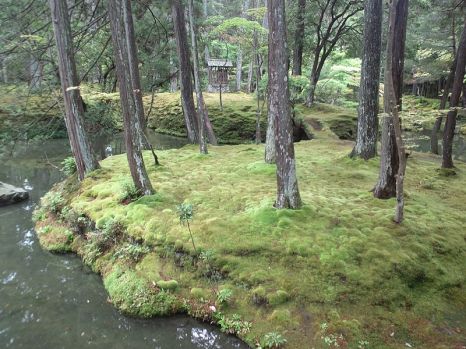 Mosses are diverse: Sphagnum is the best known genus of bog moss and is made up of over one hundred species. In total there are over 10,000 moss species that grow across all seven continents, often in “extreme” habitats that are not tolerated by vascular plants.

All of my Bogological work has been completed in Antarctic Peninsula region. Whilst the peat banks found there are not classical bogs (they are most closely allied to raised bogs, generally getting water through rain or snow inputs), many of the same principals apply and they are potentially great archives of past climate.

So, why do moss peat banks accumulate in Antarctica – generally imagined to be a freezing cold, expanse of white, rather than a continent complete with a diverse moss flora? Well, actually, moss banks are extremely unusual growth forms even in Antarctica where there is little competition from higher plants. Over 99% of Antarctic land is permanently covered with ice, not leaving much room for the moss to grow. The banks are only found on a few remote islands and headlands to the west and north of the Antarctic Peninsula. The oldest and deepest banks have been found on Elephant Island, the same bleak and remote landscape in which Shackleton’s men survived for four months. 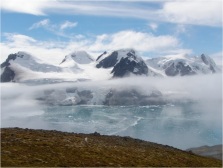 Mosses in Antarctica need to be tough: weather can change from benign and sunny to a blizzard, within 24 hours (photo: J Royles)

In fact, mosses have lots of attributes that facilitate their survival and growth in the outwardly inhospitable South:

To summarise, the moss bank species have several traits that allow them to rapidly re-activate and make use of the brief periods in the year when the light, temperature and water availability are suitable for growth. They can survive in essentially a dormant state when conditions are too dry, cold or dark for growth, a quality highlighted recently when scientists from the University of Alberta in Canada managed to revive moss that had been under a glacier for 400 years!

Moss emerging from under the snow on Janus Island (photo: J Royles) 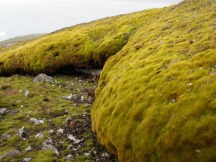 We should salute the amazing Antarctic moss species that have slowly grown and accumulated over thousands of years, with the peat material excellently preserved by permafrost, allowing us to appreciate a true wonder of nature and utilise the frozen peat as a record of past climate.