Being a Bogologist is a great job. Not only do I get to do something for a living that interests me a great deal, I get to travel the world doing it too! I also work with a whole range of other scientists, interested in various aspects or methods of reconstructing past environmental change. So, this summer I was lucky enough to get the chance to go to Alaska – not as a Bogologist, but to help out with some research focussed on another system entirely.

‘Thermokarst’ lakes form as permafrost melts and the ground subsides, filling in with water. For this reason, they’re also sometimes known as ‘thaw’ lakes. As the ground continues to thaw, vegetation and other organic matter falls in the lake, begins to decompose and releases methane gas. As the edges of a thermokarst lake melt, dying trees begin to lean towards the lake, ending up with the name ‘drunken trees’! To demonstrate how much gas can be released, here’s a great video of Dr. Katey Walter Anthony from the University of Alaska, Fairbanks, igniting some of the methane bubbles! 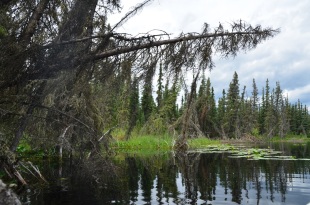 Trees and vegetation falling into the lake as permafrost melts.

‘Drunken trees’ at the lake edge.

The most recent IPCC report, which came out a few days ago, confirms that temperatures are rising more in the northern high-latitudes, in places like Alaska and Siberia, than anywhere else on Earth. This increases the chances of permafrost melting and will probably mean that more thermokarst lakes will form too. We’ve discussed elsewhere the dangers of warming at high latitudes and how this can result in increases in the release of carbon as carbon dioxide (CO2) and methane (CH4) as permafrost melts. The problem is we don’t know enough about this process. So that’s what our trip to Alaska was all about – finding out more about carbon cycling in the numerous lakes of these high latitudes.

“But this is a blog about bogs”, I hear you cry, “where does the peat come in to it?”

Well, even though it was lakes we were after in Alaska’s far north, my mind was still on peat (and making sure we had enough mosquito repellent)! Part of our fieldwork was to be based in the Gates of the Arctic National Park deep in the heart of Alaska’s mountainous Brooks Range and inside the Arctic Circle. The only way to get to our field sites, which were about 200 miles from the nearest village, was by floatplane. There are very few airports out in the Alaskan bush so if you want to go somewhere specific there’s only one place to land: on lakes – nature’s airstrips.

Flying over mile upon mile of uninhabited wilderness was breathtaking. Trees, rivers, mountains and lakes – for as far as the eye could see. But there was something else down there – no, not Grizzly bears (well, not that I could see anyway) – peatlands! Loads of them!

A mat of Sphagnum develops at the edge of an Alaskan lake. 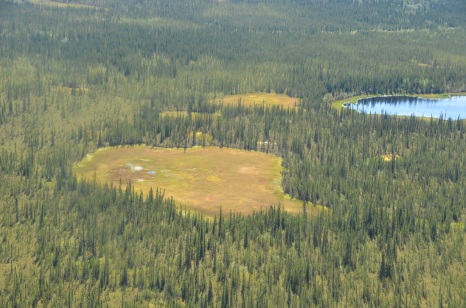 An Alaskan peatland from the air!

Because it gets so cold in the Alaskan winters – and because they last so long, as the inhabitants will remind you – the plants that do manage to grow there do so extremely slowly. As a result, peatlands do grow, they just tend to lack the accumulation rates seen in some of their more southerly cousins. Although they contain many of the same species of plant and microbes, the extreme cold they experience interferes with the potential for extracting a climate signal, at least in terms of water table reconstructions. They’re potentially very useful in other ways though – they can tell us a lot about carbon cycling in the northern high latitudes.

When a thermokarst lake drains – which they can do in a bizarrely rapid manner – conditions are often ideal for peatland formation. Of course, as with any lake, transition to peatland can also occur as peat begins to form at the lake edges, invading the lake basin. This can only happen with thermokarst lakes when they stabilise and effectively stop melting at the edges – when the drunken trees disappear!

A new paper by a team from Lehigh University (Eric Klein, Zicheng Yu and Bob Booth) looked at the role that peatlands which form in thermokarst lake basins play in carbon cycling. They examined at a peatland that had been accumulating in place of a thermokarst lake since c. 1600 AD. For approximately 100 years, the site persisted as a fen system before Sphagnum moss began to dominate, turning the site into a bog. The amount of carbon the bog accumulated remained relatively stable for nearly 300 years, but in the 1970s this carbon accumulation rate increased dramatically. It is suggested that the change could have occurred in response to a warming trend seen in the Pacific at this time which has seen regional average temperatures increase by 1.5°C since. If this pattern is typical of other thermokarst lake basin peatlands, the authors conclude, then it is possible that such increases in carbon accumulation could help offset some of the carbon being released by melting permafrost and newly formed thermokarst lakes themselves!

These findings are not dissimilar to those of Matt’s recent work in the Antarctic Peninsula – showing us, yet again, that peatlands are important not only for the study of past environmental change, but hugely important in the discussion of future climate change!