If you have been surfing the pages of Bogology, you will have come across a fair few mentions of Sphagnum moss.  Since this is such an important plant species to a lot of the work we do, I thought I would expand on its wonderfulness in this blog post!

In the majority of Northern Hemisphere peatlands, Sphagnum is the primary peat forming moss species and its growth covers vast swathes of North America, northern Europe and Russia.  There are smaller clusters of Sphagnum peatlands in South America and Sphagnum can also be found in Australia and New Zealand, although it does not tend to dominate peat formation in the same way there. 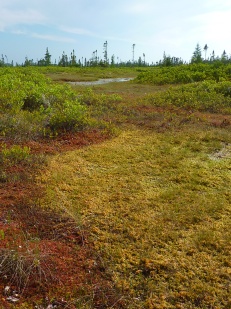 Sphagnum bogs are home to wildlife and beautiful berries 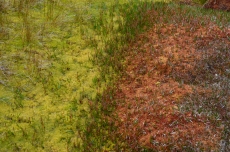 Sphagnum has a very interesting physiology – not only can it hold around 20 times its own weight in water, effectively acting as a sponge, but it actively engineers an environment in which it flourishes whilst making conditions difficult for other plants to outcompete it.  Clever, eh?!  It does this through a process called cation exchange – by taking up nutrients such as potassium and magnesium and giving up hydrogen ions in exchange – a process that effectively acidifies the ecosystem.  Like all mosses, Sphagnum lacks leaf stomata and so cannot actively control water loss from its tissues – this has led to it being described as essentially ‘at the mercy’ of climate.

Even the sex life of Sphagnum is interesting!  It can reproduce both sexually (through the production of spore capsules which swell and swell before erupting in a fit of physiological pleasure, distributing its potent spores far and wide) and asexually as bits break off and form other plants.

A range of Sphagnum species are found on the ombrotrophic peatlands on which we work.  Around 120 species have been recorded globally, but we deal with only around 10% of these on a regular basis.  All individual Sphagnum plants have the same basic structure – a main stem with smaller branches coming off it and a tightly formed head, or capitulum, at the top from where new growth occurs.  Each head represents a single individual so the large lawns and hummocks that you can see in the photos on this page are actually made up of thousands of thousands of plants!

A carpet of Sphagnum, the little white dots are spore capsules, ready to burst!

The general form of a Sphagnum plant with long stem, side branches and head at top. Image credit: Wikimedia Commons.

Each Sphagnum species has its own environmental preference and will form different features on the bog surface.  Some species with long slender leaves prefer to live in very wet conditions and may even survive just below the water surface at the edge of pools.  Other species with larger, broader leaves often form flat expanses of moss known as lawns.  Other species still, with tiny, fragile leaves, often a vivid deep red in colour, form high hummocks growing up away from the water table.  We can identify different species of Sphagnum using features visible to the human eye but also, when the shape and size of leaves is similar, the finer details of cell structures we see under the microscope.

Because of the wet, acidic conditions that Sphagnum plays its own part in creating, moss accumulates very gradually over time because dead plants do not decay fully and are gradually overgrown by new growth.  On average, Sphagnum peat may accumulate at a rate of around 10 years per centimetre, meaning that today, a bog that began its life at the end of the last ice age might be 10,000 years old and over 10 metres deep!

As well as its role in our scientific investigations on past climate change, the ‘Sphagnum story’ also has many other chapters, some more palatable than others.  Let’s get the bad bit out of the way first. Over the years, especially in north-west European countries such as the UK, Ireland and the Netherlands, vast swathes of pristine Sphagnum peatland have been lost to peat cutting and mining for fuel and fertiliser as well as to general development pressures including the conversion of wetlands to agricultural land.  To a Bogologist, the use of Sphagnum moss compost to help your tomatoes grow on your patio is sacrilege!  Please, if you take one thing from this website, make it to always check that your compost is peat free and support the I Don’t Dig Peat campaign!

Sphagnum peatlands take thousands of years to accumulate and, not least amongst a swathe of important environmental functions, act as a massive global carbon store.  The loss of a considerable proportion of natural peatlands over the past century is a tragedy, but may at least be seen in some historical context.  To continue that exploitation now is, in my opinion, misguided bordering on reckless.  When it is gone, it is gone, taking those valuable environmental functions with it.  An interesting alternative perspective on the UK context of peat exploitation is provided here.

The ‘lighter’ side of the history of Sphagnum includes its use in dressings during the first world war and in rudimentary nappies and sanitary towels!  Just as with peat-free compost, I hope you’d agree that better alternatives are now available!

Finally, despite bogs often being perceived as somewhat dull, dangerous wastelands, we hope that the photographs of Sphagnum on this page, in all its wonderful diversity of colour and form, can help to dispel those misconceptions!