Without applying a chronology, or timescale, to the data we derive from our peat cores, the information is largely meaningless. It is only when we swap depths for ages that we can compare our work to that of others and use our records to test the past climate related hypotheses that are projects are founded around. However, this seemingly straightforward process of converting a depth to an age is anything but. In peat bogs, the main method used is radiocarbon dating. This is effective, but individual radiocarbon ‘dates’ need to be carefully calibrated and models developed to give ages to the depths in between those that have been measured – a single radiocarbon dates can cost around £400, so it’s not possible to date every centimetre of our cores (though we would like to!). When a radiocarbon age-depth model is developed it comes with a certain amount of error – for example, we could never say for example that a depth of 100 cm is exactly 1000 years old. Rather, we would be able to say that 100 cm depth is between 800 – 1200 years old. 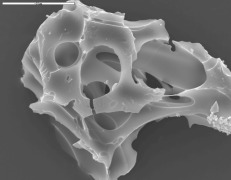 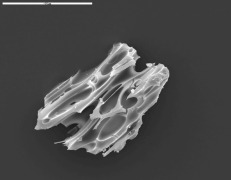 One way of reducing the amount of error in a radiocarbon age-depth model is to use additional dating methods alongside radiocarbon. One such method is called tephrochronology. This is based around finding layers of tiny shards of volcanic ash (known as tephra) in our cores. These shards are ejected when a volcano erupts and are so small and light they can travel huge distances from the source. Recent research by Sean Pyne-O’Donnell and colleagues published in the journal Quaternary Science Reviews recently identified Alaskan tephra in a peat core from Nova Scotia, Canada, some ~6000 km away.

Each volcano and individual eruption has a unique ‘geochemical signature’ (a scientific way of saying the proportions of different elements the shard is made up of). By analysing the shards we find, in a layer at say 110-111 cm depth, we can therefore assign those shards to an individual eruption. If that eruption was in the historical time period, for example the eruption of Iceland’s Hekla volcano in AD 1104, it means we can apply a precise age with little to no error to that depth – something that is not possible with radiocarbon. It gets a little more complicated when the eruptions are older than the historical period as then their ages have themselves been measured using radiocarbon, so a little more error creeps back in. But even so, using tephra is an excellent way of improving age-depth models.

Another benefit is that if you can find the same tephra layer (with the same geochemical signature) in two cores from different sites, say one from a bog in the UK at a depth of 325 cm and one from a bog in Sweden at a depth of 385 cm, then you know those two depths are exactly the same age, as a volcanic eruption is pretty much instantaneous in geological terms. The fact that the same layer is found at different depths between the two sites means that the two bogs must have accumulated at different rates. To put it more simply, one was growing faster than the other, in this case the Swedish bog. Even more, if you can find the same tephra layer in two different types of core, say a peat core from the UK and an ice core from Greenland, then you are really getting somewhere in terms of correlating evidence in time.

As ever, there are complicating factors to be aware of. Recent research by Graeme Swindles and colleagues, published in the journal The Holocene suggests that in some cases, the tephra layers found in peat cores, which are very often discrete and cover only ~1 cm depth, may hold a signature of human disturbance. They looked at two cores from the Shetland Islands, UK and found that tephra shards spread over 10 – 40 cm coincided with an increase in heath and/or moorland pollen types and signs of burning in the landscape (an increased abundance of charcoal shards). They suggest that this burning, whether as a result of human activities or an increase in natural wildfires, caused more erosion and remobilised tephra that had been deposited in the past, sometimes combining the shards from eruptions that were ~300 years apart.

This research doubtless adds a cautionary note to the use of tephra as a chronological tool, especially in areas with a known history of human impact. However, there still remains little doubt in my mind that if carefully applied, using these sometimes enigmatic layers of volcanic ash we find in our peat cores to improve our age-depth models provides greater confidence in conclusions we may draw about what happened when in our cores. Turning depth into time – one of the most important aspects underlying all of the research that we do into past climate.